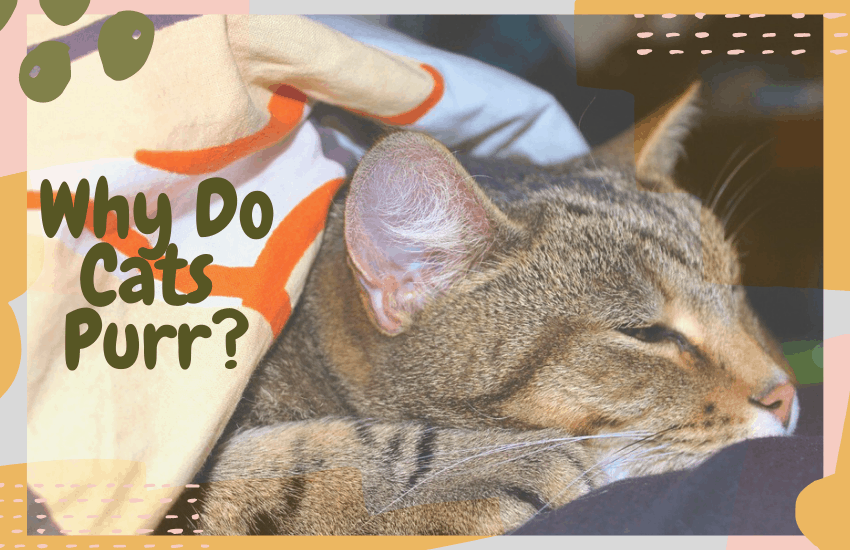 As cat parents, we love being treated to the gentle rumble of our cat’s purr. We relish in the joyful fact she feels happy and relaxed enough to purr and that we help her feel that way. While we assume she’s purring because she feels content, that reason may be too cut and dried. Research has shown cats purr for a variety of reasons and we just need to learn how to interpret them!

The Science Behind Purring

In order to understand why cats purr, it is important to understand not only what purring is but also how it occurs. Purring is a vocal feature that is most widely known as occurring in domestic cats. Less widely known is that purring can occur in non-domestic cat species as well as other species of animals. For example, other species that can purr include bobcats, cheetahs, hyenas, guinea pigs, and raccoons! So, what causes a species to be able to purr?

In the past, it was believed purring was the result of blood rushing through a large vein called the inferior vena cava. Throughout the years, this thinking has progressed as more research has been done. Today, it is thought the cause of purring first starts in the brain. From there, the brain fires of a signal to the interior laryngeal muscles, which are responsible for the production of sound. This repetitive signaling causes the laryngeal muscles to produce 25 to 150 vibrations per second, creating a separation of to vocal cords and resulting in a purr.

The reason some species of cats aren’t able to produce a purr is that they have what is called laryngeal paralysis. Essentially, what this means is the muscles surrounding the interior laryngeal muscles aren’t stiff enough to emit a purr. Species that are unable to purr include lions, jaguars, leopards, and tigers. While we won’t ever hear a rumble from their chests, feline species’ that can’t purr have the benefit of being able to roar, whereas cats that can purr are not able to roar.

Why Do Cats Purr?

A lot of people think cats purr solely because they are happy and content. While cats do purr to convey happiness, researchers have found cats purr for many other reasons. Some of those reasons may surprise you!

The most obvious and widely thought reason a cat purrs is to convey happiness. Cat lovers often rejoice the moment their cat stops acting aloof and settles onto their lap. Once she starts purring, any hope that cat parent had of doing something other than acting as their cat’s pillow goes right out of the window.

The question is, how do you know she is purring because she’s happy? Experts say to pay attention to her ears, tail, and eyes. If she is feeling content, her ears will be relaxed and drooping and her eyes will be half-lidded or fully closed. The final sign of relaxation is in her tail. If it’s flicking back and forth quickly, she might be feeling a little annoyed. On the other hand, if it’s barely moving chances are she’s feeling good.

A great way to make your cat happy is to spoil her with a little extra love and attention. Invest in a quality cat brush and spend some time giving her a rub down. She’ll love the feel of the brush and as a bonus, it will reduce the amount of hair she sheds around the house.

A Cat Purrs When Hungry

Have you ever noticed your cat behaving in an overly friendly or lovey way around her regular meal times? Perhaps she follows you around the house meowing a demand to be fed, or maybe she finds you on the couch to rub her head against yours. Maybe you noticed she was even purring. It may seem odd, but cats will purr when they’re hungry or want to be fed sooner than their normal feeding time.

Her hungry purr won’t be the same as her normal purr, though. British researchers actually performed a study to find an answer to this very question. They determined a hungry purr sound different from a happy purr. Rather than the deep rumble of contentment, a purr born out of hunger contains an unpleasant cry, similar to that a baby makes when it is hungry. The researchers discovered most people could distinguish between the sounds even if they weren’t cat lovers.

Purring is a Form of Mother-Kitten Bonding

Purring is also an essential tool for a mother cat and her kittens. Kittens are able to purr just a few days after birth and the ability goes a long way in a mother-kitten relationship. Purring helps a mother cat locate her kittens and gauge their needs. She’s able to determine if they’re okay, if they’re hungry, or if they’re in distress. Purring also acts as a source of comfort and a soothing lullaby for her kittens.

Cats Purr When Anxious or Nervousness

The way a mother cat will use purring to comfort her kittens carries over into their adult life, too. When a cat is feeling nervous or anxious, they may use purring as a way to soothe themselves. Think of it like a deep breathing exercise someone does when they need to calm down.

Scientists believe cats use purring as a form of pain relief and to speed up the healing process. According to those scientists, purrs that fit in the 24-140 vibrations per minute range can have therapeutic for pain relief, healing wounds, and bone growth. Bioacoustics researcher, Elizabeth von Muggenthaler, studied the purrs of domestic cats, ocelots, cheetahs, and pumas and was able to determine their purrs met the frequency required for bone regeneration.

Purring doesn’t just stop at bone growth though. Research shows the vibrations cats make when they purr can also repair tendons and muscle tissues, reduce swelling, ease pain, and slow breathing. Some believe the effects of purring explains why cats heal easier after surgeries than other animals and impact a cat’s ability to survive falls from high places.

Purring Has Positive Impacts on Humans

Purring is amazing tool cats use to communicate, soothe and heal themselves but it doesn’t stop there. A cat’s purr can also benefit humans. It goes without saying there’s nothing quite like the joy we feel when gifted with a gentle purr from our feline friend. This benefit in itself is great, but a cat’s purr can have surprising health benefits for humans, too.

Purring Can Reduce Anxiety in Humans

Feeling anxious is a natural part of life, but the degrees of anxiety humans face can vary. That being said, people suffering from any form of anxiety whether it be mild or debilitating panic attacks can benefit from the love of a cat. Cats can sense when we feel anxious and often do their best to calm us down. The purr of a cat does wonders in helping an anxious person relax.

Purring has a calming effect on humans, too. In fact, studies have shown cats are better at reducing stress and lowering blood pressure than any other pet. The soothing vibrations and sounds of a cat purring while humans interact with their cats have a calming effect. This makes cats a perfect choice for the role of an Emotional Support Animal.

Purring Reduces the Risk of a Heart Attack

As noted above, purring has the ability to lower blood pressure, which reduces the risk of a heart attack. In fact, a study performed over ten years by the University of Minnesota showed cat parents were 40% less likely to suffer from a heart attack than people who didn’t have cats. While they couldn’t say for sure whether or not purring had a direct impact on the results, previous evidence shows purring has a positive effect on humans.

People who suffer from shortness of breath, also known as Dyspnea, can also benefit from the purr of a cat. The rhythmic sound of a purring cat mimics that of mindful breathing techniques. The slow inward and outward rhythm of her purr can be used as a guide and ultimately helps a person to stay calm and catch their breath.

Just when you thought cats couldn’t get any more amazing, right? Not only does purring help them communicate, it benefits humans too! Plus, knowing more about why cats purr can help us cat parents better understand our furry friends. So, the next time your cat gets her purring motor running, ask yourself why she’s purring. Is she hungry, happy, or in pain? Paying attention to the different signals she gives you will help you determine just what she needs.