You are here: Home / Cat Help / Are Cats Smarter Than Dogs? 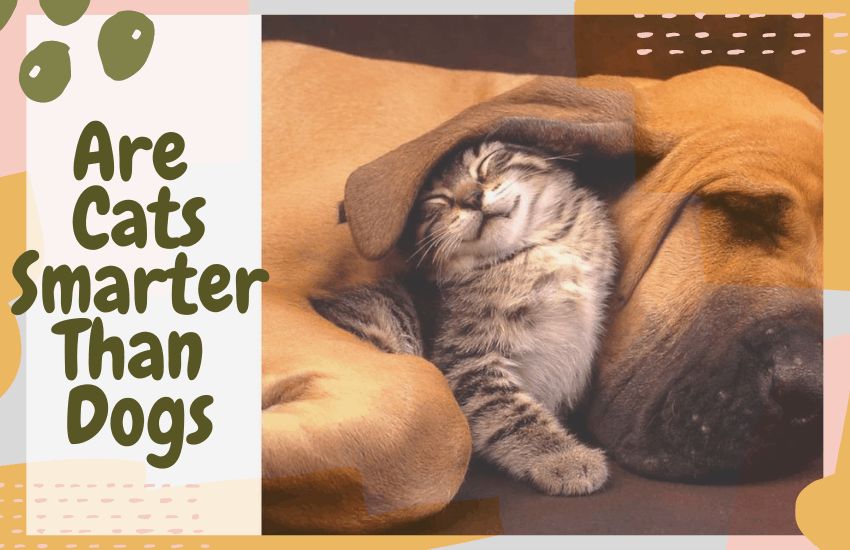 People like to measure up to each other. Who’s got the best phone, who drives the nicest car, who’s got more money? Of course, cat and dog owners make no exception. So, who’s right?

What Does it Mean to be Smart?

Ask anybody whom they consider to be a smart person, and you’ll universally hear the names Einstein, Michelangelo, or Stephen Hawking. “Smartness” goes way beyond the capability to understand complex scientific theories.

Today psychologists agree that emotional intelligence is as important of quality as is the capability to “get” science. Emotional intelligence refers to how well a person can read others and respond appropriately. It is also one of the unique qualities that humans possess.

For all we know, we are the only ones that can experience such a broad range of emotions which on top of that can alter our actions (i. e. we have a conscience that can say that you are feeling a certain way and need to act accordingly).

The idea of emotional intelligence and consciousness is directly tied to our reasoning abilities. Unlike animals, who act upon instinct, we can reason whether our actions are necessary or appropriate.

We can also reason whether our actions will hurt somebody. Hence, we are the only animal species that can inflict pain (physical or emotional) out of pure spite. Having such capabilities comes with a huge responsibility.

Unfortunately, we see every day that being “reasonable” is not a guarantee that humanity is only using its gifts for doing good. It is reasoning that allows people not to feel remorse when damaging others. It’s unfortunate but being smart is a weapon as much as it is a shield.

To be able to act against instincts

Due to our capability to reason, we can also act against our instincts. It’s what has allowed us to have arts and entertainment.

If it were up to our survival instincts, we’d be spending all of our time trying to survive. Yet, we have developed so much that basic survival is no longer a concern for most of us. We have food ready on demand, we are sheltered from the elements and continuously develop immunity to diseases.

This allows us to focus on doing things that are not important to our survival, such as doing arts or engaging in leisure activities. In other words, we have shifted from focusing on physical survival to focusing on mental one.

To sum up, being smart is not only about one domain of our lives. Smartness and intelligence come in various forms, and, each one of them is as important as the next.

We consider ourselves to be the smartest species because our consciousness allows us to act against our instincts. This, in turn, permits us to explore the world in ways that no other species can. Overall, being smart is all about adaptability, and we have turned out to be the most adaptable to a broader range of sudden environmental changes.

Cats vs. Dogs – What Does Science Say?

How is animal intelligence tested?

Contrary to what many might believe, the main purpose of scientific research into the matter is not to boost the confidence of dog or cat owners. Scientists perform tests on cats’ and dogs’ mental capabilities so we can take better care of them, read their behavior more accurately and make some sense of why some species are more “intelligent” than others. To reach a conclusion the people in white coats count the neurons in cats’ and dogs’ brains.

Neurons are a sign of intelligence because are the building components of a brain’s ability to make sense of the world. They send each other electrical impulses, thus triggering or responding to feelings (pain, hunger, thirst), emotions (anger, happiness, sadness), movement and a bunch of other things that make living things alive.

When scientists get to explore brains, they do so with the theory that the more neurons a brain has, the more intelligent is its owner. This is because having more neurons means a broader capability for understanding and adapting to the surrounding environment.

Last year a study was published in the Frontiers in Neuroanatomy which seems to give a definitive answer on who’s smarter between cats and dogs.

According to the scientific paper, dogs have twice as many neurons as cats, thus giving a significant cognitive edge to canines. On average dogs had 500 million neurons in their brains, while cats had half of that – 250 million.

The publication of the study must’ve caused a wave of parties across the dog-loving community, but as it turns out these results are not conclusive as of who’s actually smarter. So, dog owners, hold your pooches before you burst into a devilish laugh.

…it’s not that simple

As noted above, the idea that the number of neurons is indicative of intelligence is only a theory. Before its inception, neuroscientists looked at brain size to judge who’s smarter, but the correlation between the two has been much debated in recent years.

A newer theory might emerge, doubting the idea that a higher neuron count means higher intelligence. Besides, such a study cannot be conclusive without taking into account how cats and dogs make use of their neurons.

A Japanese study from last year suggested that cats and dogs are capable of recalling pleasurable past experiences as humans do, but cats can do so “on demand” while with dogs is more of an episodic occurrence.

Cats vs. Dogs – What Do People Say?

Cat videos – an institution in their own right

Science says that, technically, dogs are smarter than cats, but what does the popular opinion state? There doesn’t seem to be much dispute in this area.

Cat videos have become an institution in their own right with whole websites dedicated to them. You just don’t see the same interest with dogs, which is probably why dog owners are so envious of our little furry friends.

Social platforms such as Facebook and 9GAG are thriving on cat videos further proving that felines are way more popular than canines. We are not saying (yes, we are) that cats are superior because they are more popular, but it’s some food for thought on why that is.

Now that we’ve cleared the question of who’s more popular let’s see where people stand on the debate on who’s better looking.

After a semi-methodological digging into Google’s results, we picked a (somewhat) random Quora post that discussed the topic. What caught our attention in the top answer was the gracious comparison between an artist and an athlete.

It’s quite true, cats are artists – even when they are jumping around for no apparent reason, they do so with finesse. It’s like watching a prima ballerina doing her best act. Dogs are more like athletes – there is fascinating power in their movements, but it comes at the expense of grace. Sorry, cats win again.

In preparing for this article, something interesting and rather bothersome stood out. It seems that the most popular question on the topic of cat and dog smartness is “are cats smart like dogs?”

We can’t help but wonder why somebody would assume that dogs are so smart that cats need to be compared to them and not vice versa. Have you ever seen a dog standing with a biscuit on his nose, waiting for his owner to says that it’s OK to eat it? There’s nothing smart about that. On the other hand, cats are go-getters. They are not gonna stay around waiting for you to tell them what and when to eat. They are better than that. Smarter than that.

How to Prepare for a Cat Invasion

Sooner rather than later cats will rule us all. So, it’s better to get your mind ready for it will not be an easy reign for us mortals.

Everything we know about the world will change. Arts, sports, and hobbies will be forever transformed. Do you know those meowdern art pieces that nobody understands? They will go down the drain to make a place for more meaningful creations made of yarn and toilet paper.

And no more athletic activities, please and thank you. Grooming and sleeping are as exhausting as they will get.

Holidays will not be the same either. Come Halloween the only acceptable costumes will that of Catwoman and Supercat. Oh, and this candy corn that you’ve saved from last year? You can get rid of it – nothing else but catnip and tuna shall make it into a cat’s treat bag.

Forget about your heroes

Generations’ favorite characters will be obliterated from the face of the earth, making way for Tom and Puss in boots.

The real-life Plutos, Jerries, and Tweeties will have a much tougher time. Those that are not turned into molecular gastronomic feast will be sent into exile to contemplate on the fact that their only fault is not being born a cat.

On the upside, with dogs out of the way, there will be no reason even to doubt who’s smarter. According to cat logic, whatever you don’t see doesn’t exist.

We are the ones who can make right from wrong

Much of this article was meant to be fun, but we do need to end on a serious note.

We already mentioned that being the most reasonable species comes with a huge responsibility. We are the only ones who can make right from wrong, which is why it’s on us to protect our planet, including all living creatures who live on it.

We all have bad days, get upset, and need to vent. But we have no right to do it at our pets. It doesn’t take much to hurt an animal, but it takes a lot of work to feel like a decent human being after doing so. We plead to you use your human brain to take care of your pet with all your heart and keep your humanity at all times.

Unfortunately, we are also susceptible to violence

Because we can feel and reason, we are also susceptible to violence. While our cognition has come a long way, our physiological development is lagging behind.

Without getting deep into neuroscience, let’s just say that our brains are still primed for war and survival even at times when we are not really threatened. This is why we are capable of inexplicable violence which often is directed at creatures that are weaker and defenseless.

In fact, harming them is a sign of weakness in itself. While we try not to sadden ourselves by thinking about it, the fact is that the world is full of pet abuse and we should act on it, else nobody will.

Act against the bystander effect

The bystander effect is a popular phenomenon whereby bystanders fail to intervene in an emergency situation because they think “there are other people here, somebody will do something.”

The bystander effect is a popular topic in social psychology and a cause of many failures to save a life. This is why you should act right out if you notice any kind of abuse, including toward pets. They are our friends, but they are also at our mercy. Don’t just wait for “somebody” to report a neighbor who beats his dog. Be this somebody.

Let’s give a definitive answer once and for all. We are the smartest creatures, we like creatures who are similar to us and we like cats more than dogs. Ergo, cats are as smart as people and much more so than dogs. Case closed.

Don’t like that answer? Visit our sister site ScoutKnows and find your canine companions.