You are here: Home / Cat Help / Does Your Cat Have 9 Lives? | Interesting Facts and Myths About Felines

With the reputation of being independent creatures, cats have an air of mystery about them. When you couple these mysterious qualities with things we were told growing up, such as cats having nine lives or that black cats are a bad omen, it is easy to confuse fact with fiction.

The truth is that cats are complex creatures with many fascinating attributes. While you can’t believe everything you’ve heard, some of the things we hear about cats can seem downright crazy. So, what’s fact and what’s fiction? Keep reading to find out!

10 Myths About Cats that You Probably Thought Were True

1. Cats Always Land on Their Feet

On the other hand, if a cat falls from several stories up, it may land on its feet, but that does not mean they will go injury free because their body doesn’t have the ability to absorb the shock of the landing and they end up with injuries such as fractured or broken bones.

While it takes more patience and skill to train a cat than it does to train a dog, it is not impossible. It is important to remember that cats are more independent than dogs and don’t necessarily respond to the same kind of training techniques that dogs do. However, it can be done by using special treats as a reward for the desired behavior. Need help picking a treat? You can’t go wrong with treats from Greenies or Temptations!

Cat parents have trained their cats to do things such as walking on a leash, using the toilet instead of the litter box, and even training her to perform the same tricks that a dog does.

3. You Don’t Need to Brush Your Cat’s Teeth

Just like humans, cats can experience a buildup of plaque that eventually leads to periodontal disease. The best way to prevent any problems with your cat’s oral health is to regularly take her in for cleanings as well as practicing oral care at home by brushing her teeth in between those cleanings.

Contrary to this popular myth, cats do not have nine lives. However, that doesn’t mean they aren’t lucky! Cats are known to have survived some tricky situations – including escaping certain death by surviving impossible falls by landing on their feet.

5. You Should Give Your Cat Milk

Children’s books and movies often depict a cat’s best friend to be a saucer of milk, but research shows that saucer of milk can do more harm than good for a cat. Giving a cat any form of dairy can lead to an upset stomach or diarrhea because cats have trouble digesting the lactose found in milk. Yep, that’s right, most adult cats are lactose intolerant!

People who assume cats can’t swim or hate getting wet have never heard the nickname for the breed Turkish Van – Swimming Cats! While cats don’t make swimming a habit, they do have the natural ability to do so.

7. Cats Only Purr When They are Happy

When your cat spends his evening curled up and purring in your lap, it is easy to assume that he is purring because he’s content. This is true, but purring can also be a sign that your cat is distressed or in pain and he is purring as a form of self-healing, to relieve pain and heal wounds.

8. Cats are Unhappy Being Kept Indoors

Some cat parents can feel guilty about keeping their cat indoors because they fear that they are inhibiting a cat’s true nature of hunting and enjoying the life of the outdoors. This guilt is not necessary though because chances are your cat has been indoors for most, if not all, of its life and doesn’t know otherwise.

Cat parents can also rest easy knowing that giving your cat a home indoors allows them to live a long and healthy life because he isn’t exposed to the risks of the outdoors such as disease, injury from predators, and cars. It is easy to cater to your cat’s natural instincts with toys, scratching posts, and plenty of places to climb and perch on. If you still feel guilty, it’s okay to take your cat outdoors as long as you keep in on a harness for his safety.

9. Cats Lose Their Ability to Balance If They Don’t Have Their Whiskers

Cats may not need whiskers to help with their balance, but they do need them for other things. Because their whiskers are longer and stiffer than their fur and are connected to their muscular and nervous system, they are vital to helping a cat detect changes to their surroundings. Whiskers help them determine if they can fit into a small space, visually measure distance, and even to detect vibrations in the air.

10. Cats Should Be Fed Raw Fish

Just like a cat and a saucerful of milk, people often think of cats eating fish. While eating fish every now and then won’t be harmful to your cat, eating fish frequently can be detrimental to your cat’s health because fish alone doesn’t have all the necessary nutrients your cat needs in its diet. Feeding your cat raw fish also increases the chance of mercury poisoning and the possibility of food poisoning due to bacteria found in raw foods.

1. A Group of Cats is Called a Clowder

Ever wonder how to classify a group of cats? Well, now you know! A clowder is a grouping of three or more cats. This group also goes by the names a pounce, a clutter and a glaring. If you’re referring to a group of kittens, though, they’re called a kindle.

2. The Oldest Breed of Cat is Called the Egyptian Mau

Dating back to as early as 1550 B.C. when cats were worshipped by kings and pharaohs, is the Egyptian Mau. This ancient breed is one that features agility and a beautiful spotted coat and gets its name from the Egyptian word for cat.

3. Cats Have Many Scent Glands on Their Body

Cats may not be able to compete with a dog’s sense of smell, but they do have a strong sense of smell thanks to scent glands on their forehead, lips, chin, the underside of their paws and along with their tails. Cats lick themselves in order to remove scents from their body, including the scent of their pet parents after being pet.

4. A Cat’s Nose is Like That of a Human Fingerprint

A human fingerprint contains many unique ridges and patterns that set it apart from the fingerprints of other people. Similarly, a cat’s nose has a unique pattern of ridges that could potentially be used to identify them.

Cats have five toes on their front feet, but only four toes on their back feet. However, there is an exception to this if a cat is a polydactyl, in which case he has anywhere up to eight toes on any one of his paws. Fun fact – cats can only sweat from their back paws!

6. Cats are the Most Popular Pet in the United States

In a 2007 survey, the American Pet Products Manufacturer’s Association found that cats are the most popular pet in the United States at 88 million cats in households in comparison to just 74 million dogs in American households.

A cat’s ability to fit through small spaces is thanks to the fact that a cat’s front legs are attached to her shoulders by free-floating clavicle bones. This gives them the ability to fit into small spaces, as long as they can fit their head in it.

8. Cats Have More Than Twenty Muscles Just to Control Their Ears

Those twenty muscles allow cats to be able to rotate their ears up to 180 degrees in any direction. They also give cats the ability to move only one ear at a time. Being able to move their ears so easily contributes to their overall ability to hear sounds as high as 64kHx.

9. Cats Only Meow as a Way to Communicate With Humans

Without question, cats are very agile and possess athleticism. You have probably witnessed a cat’s ability to jump a few feet from one piece of furniture to the next, but did you ever stop to wonder just how high a cat can leap? From a standstill, a cat can easily ace a vertical jump of five feet, and sometimes higher!

There is More to Cats Than Meets the Eye

While you may feel that you now know everything there is to know about the interesting, strange, and somewhat crazy things cats can do, you might be surprised to know that this is just a drop in the bucket! There is still so much to learn about cats, but for now, you have some interesting information to teach your family and friends the next time they ask why you’re so obsessed with your cat!

How to Treat Feline Eye Infections

Why Do Cats Purr? 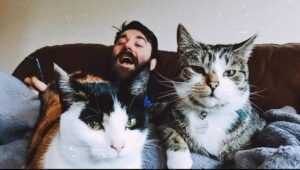